Sedimentation, clarification and filtration are essential steps to separate out unwanted solids after the fermentation process – like residual yeast, hops and proteins – and achieve a clean beer.

Traditional methods for solids removal rely on the ingredients to settle to the bottom of the conical fermenter, which can take considerable time. They are then separated from the beer using a racking arm above the sedimented yeast and hops in the bottom of the cone section to transfer the green beer to a maturation vessel for final conditioning. When the cone section of the fermenter is eventually cleared of these sedimented solids, a reasonable amount of valuable beer is lost, together with these solids. The amount of waste is typically higher for craft brewers who depending on the beer style use significantly larger amounts of hops.

After maturation of the beer at low temperatures over a period of time typically there is some residual yeast, hops, proteins and other compounds that form haze in the beer, which traditionally has been removed by Kieselguhr, candle, membrane sheet or cartridge filters which can be limited in their solids capacity, slow in filtration and expensive to maintain and clean.

By contrast, a centrifuge for brewing uses centrifugal force to do the physical separation using gentle acceleration in the bowl and the internal disc stack. Rotating at thousands of rpm also provides increased settling area to clarify and remove unwanted yeast, hops and protein solids from beer in a fraction of the time. That makes centrifugation technology a proven technology to clarify and polish beer.

The centrifugation process helps probrewers to achieve greater consistency, quality, faster turnaround of tanks, and control of losses. Additionally, centrifuges provide better retention of aromatics and volatiles than filtration systems, and control contact time of ingredients with beer. Both of these factors are important for craft brewers experimenting with different botanicals to keep up with consumer demand for exciting new flavours and premium beer styles.

Last but not least, the right centrifuge (such as the Alfa Laval Brew Series centrifuges with its unique axial hermetic top-fed design) prevents oxygen pick up to produce a high quality, consistent beer with increased shelf life, free of off flavours due to oxidation and haze caused by colloidal instability of oxygen reacting with proteins and polyphenols.

Scale up production with a brewery centrifuge

Learn from the global leader in separation about know-how and best practice for brewery centrifuges in this exclusive webinar for NZ and Australian brewers.

How does a beer centrifuge work?

The basic centrifuge idea is based on what happens in a settling tank, in which particles, sediment and solids gradually fall to the bottom, and the liquid phases of different density separate due to the force of gravity. In contrast to filtration, which filters out particles by size, the centrifugal forces remove particles by weight. Gentle acceleration in the bowl and the internal disc stack allow to physically separate the heavier particles.

The centrifuge brewing system separates solids and liquids from each other in one single continuous process. The type of centrifuge used in breweries is called a disc stack separator. How the disc stack separator works is that when the denser solids are subjected to centrifugal forces, they are forced outwards against the rotating bowl wall, while the less dense liquid phases form concentric inner layers.

The area where these two different liquid phases meet is called the interface position. This can be easily varied in order to ensure that the separation takes place with maximum efficiency. This increased area allows to remove unwanted yeast, hops and protein solids from beer in a fraction of the time.

The heavier solids phase is collected at the periphery of the bowl, where it is discharged intermittently via the centrifuge cyclone. The solids are discharged by a hydraulic system below the separation space in the bowl, which forces the sliding bowl bottom to drop down at suitable intervals, thus opening the solids ports at the periphery of the bowl. 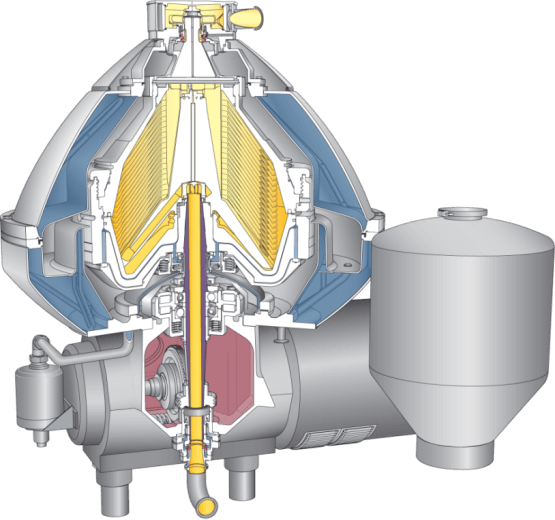 What is the difference between filtration and centrifugation of beer?

Centrifugal separation works with mechanical separation. The G-force removes particles by weight. Lighter particles are more difficult to separate. Filtration means that you separate particles by size. The two technologies complement each other very well. In brewery application you run the separator and then the filter afterwards, especially when the goal is to extend shelf life of the product. If you expect the product to be shipped overseas or it needs to have a long shelf life in the supermarket, you might want to filter the beer, otherwise chill haze might be an issue. If you want to produce unfiltered beers, and your inventory is rotating fast, then a centrifuge alone is a very good option because beer will preserve aromas and volatiles.

Your questions answered in our video guide

Whether you’ve been shopping around for a centrifuge for a long time, or have just started considering investing in one, our experts give you answers to the most important beer separation questions.

Would you like to know more about our innovations in separation technology? Click on the link below. Alfa Laval invented the first disc stack separator and has led the way in the development of centrifuge technology for over a century. We are glad to share with you the expertise we have gained along the way. Visit our Separator Innovator knowledge base to learn more about advancements in separation and the steps Alfa Laval is taking to continue revolutionizing the technology.

Learn more about our innovations for separation industry

How to choose the right centrifuge for your brewery

Selecting the correct centrifuge size for your brewery is not an easy task, with many designs and manufacturers to choose from. Key factors to choose the right model include the amount of solids, throughput and what you are trying to accomplish.

5 reasons to get a centrifuge

Centrifuges have been a privilege of larger industrial breweries for many decades, whilst a majority of microbrewers have needed to rely entirely on natural settling tile and various affordable filters. Things are changing now as more and more craft brewers are turning their eyes towards separation technology.